Hey guysss! Hope you enjoyed reading the first part of this series! A lot of you told me on DM that you felt like you were experiencing the journey with me and few of you left comments as well. I am super grateful for that! So let’s pick up from where we left off!, shall we? I covered the first two days here  so do give that a read – we saw penguins, went to Cape Point & what not!

It was supposed to be an early morning start because it was the only day we had to visit what we were staring at everyday – Table Mountain. But…..it was a late night for some people and once we reached the place, the queue was already too long. It was also a hot and sunny day and we would’ve died waiting so we decided to go to Long Street first to explore the city and take some pictures and come back later. No two places on Long Street look alike. It is very individualistic and the shops & restaurants are inspired by various backgrounds – local, Indian, international. The place screams culture! We didn’t get to visit any of the places there as we were short on time but Mama Africa certainly stood out for me. I wish I got to see what was inside.

I also took advantage of a randomly parked car and took some interesting photos right in the middle of a street. After some research, I got to know this place is really famous for its nightlife. So I guess you would be better off restaurant/bar hopping here at night.

We went to grab a quick lunch before Table Mountain and visited a cute vegan place called Lekker Vegan and surprisingly they were serving chicken. So I ordered a chicken burger which was giant in size. Our photographers, Sheldon & John had the veggie burgers and fell suspiciously ill later that day. I guess veganism is not so great after all….JK! Don’t come at me! Haha!

This is where I changed into the most ridiculous outfit for Table Mountain, but thank God it was not a windy day or I would’ve had a wardrobe malfunction for sure. You see, Long Street was supposed to happen later and I had planned everything that way. I wanted to wear pants for the mountain but I had more than enough photos in that outfit so changed either way. I had a scarf in my bag with came in very handy for the pictures later on.

A 2 way ticket would cost you around 1700 bucks (INR) that would take you up and down via the cable car. You are free to hike but is that even possible? It looks so different once you are on top, Table Mountain is enormous. Once you reach at the very top, you won’t be able to find an edge because the plateau stretches 3 kms across! And that is just one part of the mountain. It consists of various other peaks and lower levels. I don’t even know where exactly we were but the view from top was breathtakingly beautiful. We could see the entire city! The cable car ride was fun too, especially because the outer glass rotates and there is one panel which doesn’t have any glass and you can put your hands out and feel the wind! It was scary but I totally did it without dropping my phone! Achievement unlocked! There are supposed to be many endemic animals there since it’s also a National Park, but I didn’t spot any, I guess we were in a very commercial area. 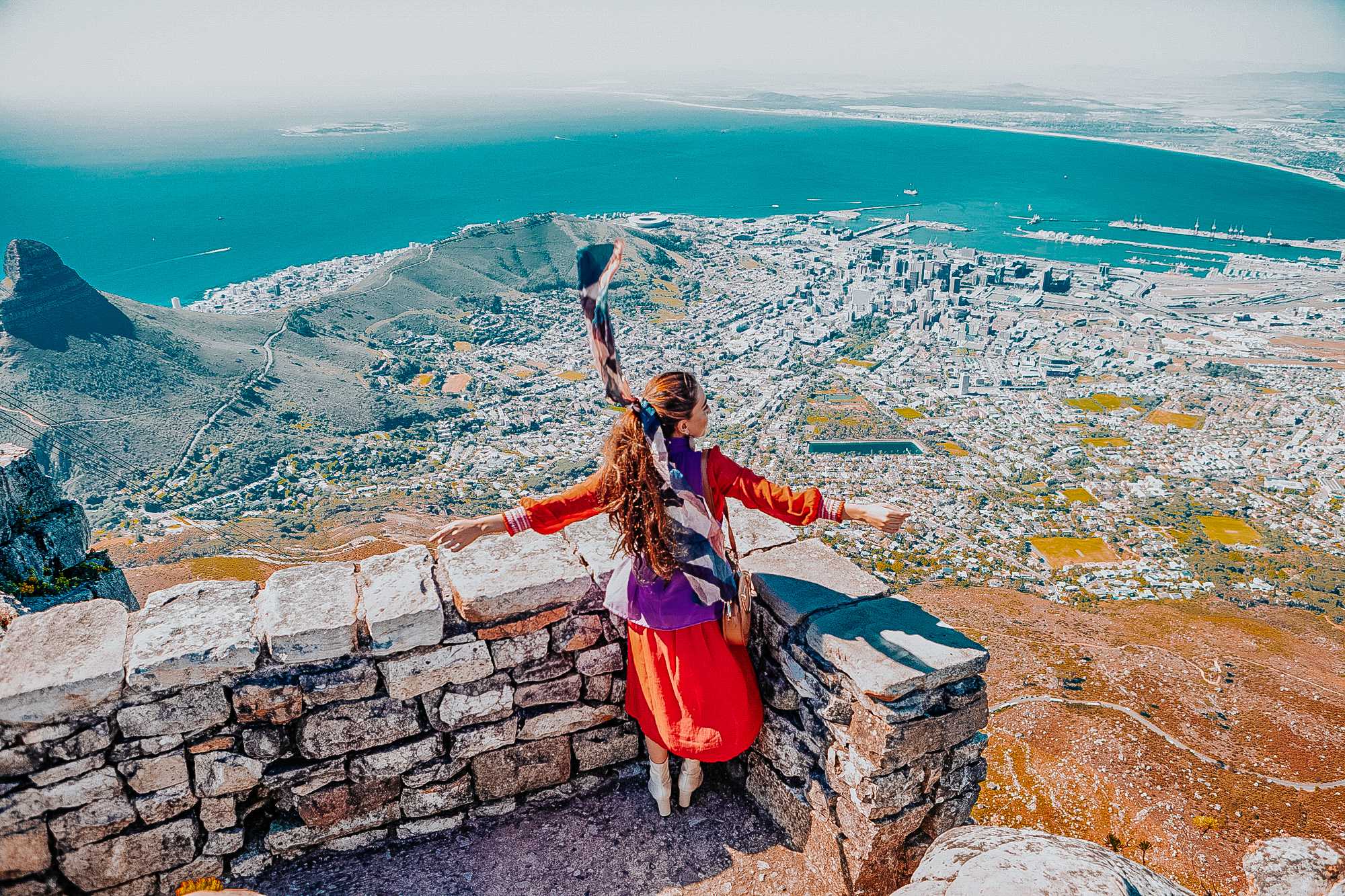 The day was turning out to be a little more exhausting than I expected. I had not even eaten well. We went back to our hotel to change for the Glamm Night dinner and headed to the Azure restaurant at 12 Apostles hotel which is known for its scenic view. The balcony had the best view and we all rushed there to  take pictures against the beautiful setting sun. The entire Camps Bay/Victoria Street area looks promising with beautiful fine dine restaurants & really happening bars. I have to mention that the restroom was pretty fancy and caught my attention so I went to do a quick photo shoot there. 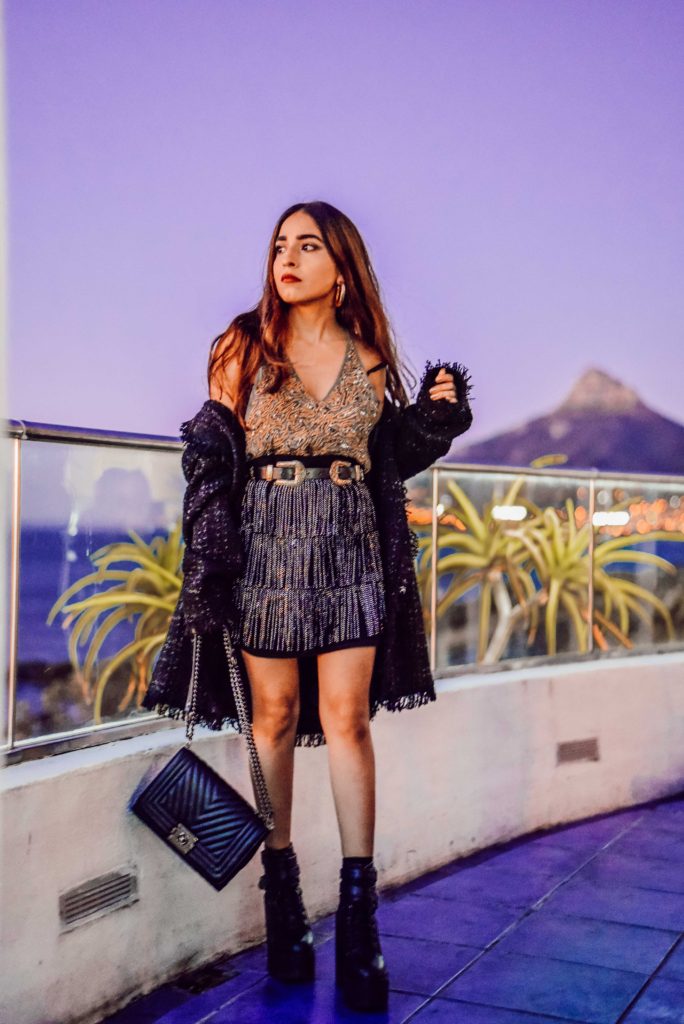 And just then, when I wasn’t present, an older man who was seated opposite us started to pass derogatory comments on the girls’ professions. Second time during this trip, we were judged for being “Instagram models” & not doing any “real work” I don’t want to blame the country or the people there, though. There are bad apples everywhere. The atmosphere had gotten really bad by the time I came out of the washroom and was updated on the situation and we left from there. Later on, in the night, a few of us went to a local club , completely opposite to the posh vibe that was going on earlier. You need to watch us dancing like crazy there on my Instagram highlights !

I slept pretty late but managed to pack as much as possible as we were leaving the next day and checking out in the morning itself.

It was a bitter-sweet feeling to get up and leave – bags were packed, and calling the concierge to take them down made me unexpectedly sad. But it had to be done. The day’s agenda was to visit the Norval Foundation which is an Art museum with a beautiful sculpture garden and also houses the Skotnes restaurant. Some of pieces were truly stunning as you can see in the pictures below. The weather was the most pleasant out of all our days here and I spent some time walking around the gallery and the balcony overlooking the garden.

We sat down for brunch at Skotnes and all of us ended up ordering the same thing, which also meant that we ended up wasting most of the food unfortunately. The coffee here is exceptionally good and this restaurant was no different, and I loved the ginger cookies they served with it. Without wasting much time, we headed to the main destination for the day – Groot Constantia.

As soon as you enter the property, you realise how massive this estate is – spread across several square kilometers. You would need an entire day to explore this heritage property but thank God we had a brilliant guide! He first showed us a map of the entire estate and told us that specific types of grapes can only grow in specific areas and it all depends on the soil & temperature. He continued to show us the types of soils present in the vineyards. What makes this estate unique is its geographical placement and proximity to both the Indian & Atlantic Oceans and therefore the grapes grown here (meaning the wine produced here) cannot be replicated anywhere else in the world. Like I said, Cape town is truly unique even within itself. We proceeded to  enter the winery where grapes are converted to wine – literally. Each wine is produced differently – green grapes are peeled, whereas red grapes aren’t so as to retain the red wine colour. There are various types of pressing, fermentation and filtration procedures that I had no idea about. After this, the wine is stored in different types of barrels , some even laced with chocolate, at varying temperatures & for different time periods, so that it matures and is then bottled to be sold.

As if this wasn’t education enough, we proceeded to our wine tasting. But I love all this, I’m quite a sucker for information and a nerd like that, so I sat there like an obedient student. For those of you that don’t know, wine tasting doesn’t mean you just sit and drink wine. There were 5-6 types of wines laid out in front of us including Chardonnay, Sauvignon Blanc, Pinotage, a few others that I can’t recall and the award winning Grand Constance. He taught us how to taste it – swirl, smell, sip and swirl it again in your mouth. Then he told us how each variant was produced from start to end, the alcohol content and what food to pair it with. There was a lot of information to receive so pardon me that I can’t remember some of the names. All in all, this was a great experience and I cherish all the knowledge I received from the best of the best. 🙂 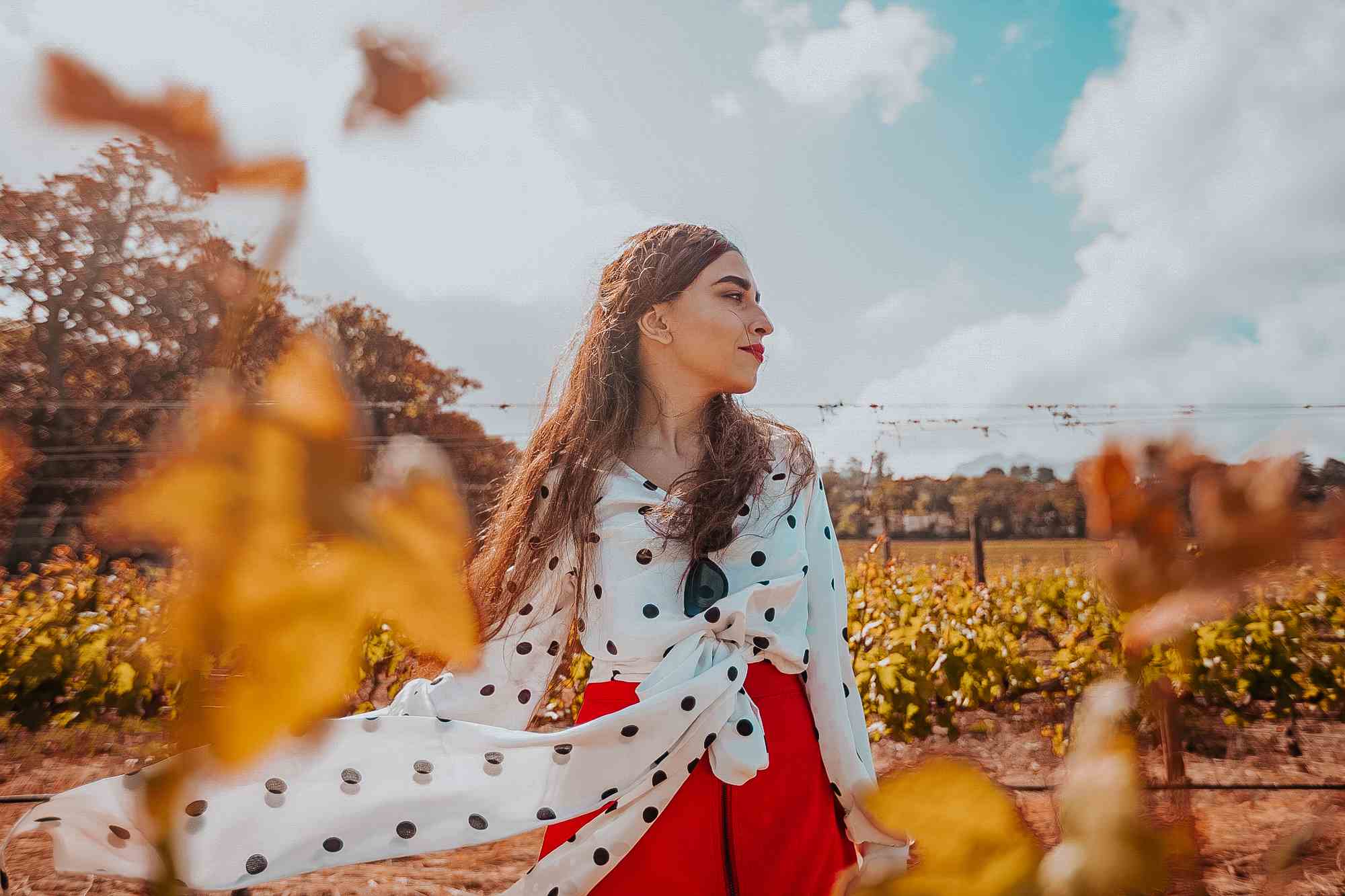 We toured the vineyards and got some beautiful shots. It was time to leave and for some reason…..we didn’t have lunch. I still don’t know what happened there. Later, we went to Victoria Wharf Shopping Center and split up. Some people wanted to shoot, some wanted to shop, I honestly didn’t want to be inside a building and wanted to take in as much as I could of this city. But it was not wise to wander off alone, even though just across the mall, the pier was beautiful overlooking the ocean.  Few things You should be careful about while in South Africa is the crime – although, in my personal experience, I didn’t face any difficulty because Cape Town is extremely touristy. However, I have heard stories about Jo’burg & Jordan, etc. , so I didn’t wear any jewelry there, not even a watch. Better safe than sorry, eh? The rest of the day was pretty blah for me and we headed for the airport. Everything was pretty mehhh once we left. I was feeling like I wanted to do and see so much more of this city but we had to head back home. I am going to go back, that I’m sure of. The flight was good – window seats again and we arrived back.

There was something I noticed and I have to share – as soon as the plane was coming closer to India (and I know this because I am always looking out of the window) the sky kept becoming duller…. From bright and saturated clear blue skies, my plane landed and it felt like there was dust in my eyes or I was wearing brown tinted glasses. Such a stark difference! I felt so sad when I got out of the plane, not because my trip was over. It was the realisation that people in power have been taking our environment so lightly and continue to do so. Pollution is man made and no steps are taken to stop it. Indian tourists never litter abroad because they are scared of facing the consequences. Why not the same back home? Simple – there are no consequences. No punishment for people who pee and spit, what can you expect from a government that has dug up the entire city on account of a metro line, which is cutting trees everyday and doing NOTHING  about the dust pollution this project is causing. Don’t even get me started on the way festivals are celebrated. Is this the case because everyone in the system is old, and they won’t be on earth to face the consequences of their destructive actions? Or people are so, for the lack of a better word, stupid and ignorant? I just dream to live in a place where the skies are blue, the sea is clean, I don’t need a mask when I leave my house and I can see stars at night. But reality strikes, along with the realisation, that my dream city would never be Mumbai.

Anyway, sorry about going on this tangent and ending this on a sad note. I just want you guys to know that you should take every opportunity to travel. Not only abroad, but anywhere. To experience nature, clean air, culture, and to never take your surroundings for granted – we are just guests of Mother Nature – would you ever like your guests to destroy your home?